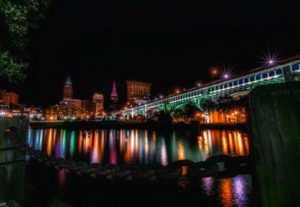 Being that Cleveland, Ohio is our major metropolitan area, it’s safe to say that it has the oldest homes around. Old homes certainly come with a certain amount of prestige and charm, but they’re not without their faults. Many old homes develop cracks and crevices when they “settle.” As a result, pests and wildlife have easy access inside. The severity of a pest problem will always depend on whether the pests can find adequate shelter in a home. Cleveland homes in particular offer ample opportunity for pests to get in and make themselves comfortable.

Westpark is unique because many of the homes on the western edge were built recently. Many of these homes have brick foundations, which are more resistant to pests than the older hollow-block and stone foundations that are common in areas further east. However, there is one main issue that we come across in Westpark that creates pest issues: missing gable vent screens. These vents can be found on each side of the home and help moderate the roof temperature. We usually find that the aluminum insect screen has deteriorated. Alternatively, some vent issues are created by pests themselves — sometimes there’s evidence of mice having gnawed through the vent. This allows for all sorts of pest entry. Birds, wasps, and mice are the most common pests we treat in Westpark homes. Pavement ants are also common because they like to find voids in the mortar joints in which to nest.

Although we don’t get a great deal of calls in the southeast section of Westpark, that’s not to say this area is issue-free. We’ve dealt with bed bugs, ants, mice, raccoons and cockroaches in southeast Westpark. In addition, many people struggle with bed bugs along the stretch of Lorain Ave. from West 150th into Ohio City. It seems to be the area hit the hardest by bed bugs on Cleveland’s west side.

We frequently get called out to the Ohio City/ Metro area for mice and cockroaches. The Fulton area is our most-serviced area for mice. We’ve also noticed that Fulton homes are more susceptible to early infestations — much earlier in the season than the rest of our service area. Surprisingly, one thing we do notice is the absence of rats. If we took some of these Fulton basements and relocated them to Lakewood homes, they would likely have a rat infestation.

Cockroaches are also very common household pests , spreading south from Ohio City into the Clark Fulton Area. This is likely due to the fact that many local grocers do not supply bags to carry food home. Instead, customers must scavenge for produce boxes to get their groceries home. After looking at the data, we think that the high rate of box use is probably how most cockroaches are introduced into homes. While this species does not necessarily thrive outdoors in our climate, they have the tendency to find new homes when infested items are relocated outside. Everyone likes to blame their neighbor for their pest problem. In the case of German Cockroaches, blaming your neighbor isn’t an unlikely excuse!

We offer all of our insect and rodent control or cleveland pest control services on the west side of Cleveland. At this time, we do not trap and remove nuisance wildlife such as skunks, opossum, raccoons, and groundhogs in Cleveland proper. For customers located east of the Cuyahoga River, we only provide rodent exclusion and bed bug extermination service.

Get A Price Quote Emailed To You