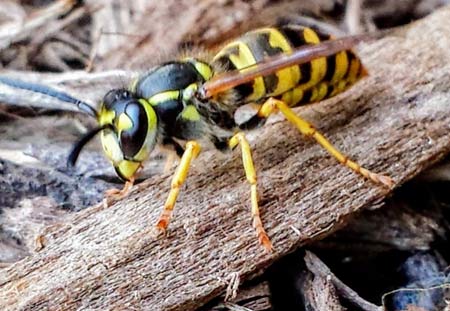 Yellowjackets are wasps. Unlike bees, yellowjackets do not have dense hairs on their bodies. Their hind legs are not flattened and hairy, like those of bees, that aid in the collection of pollen. Yellowjackets have a unique side-to-side flight pattern that they perform before they land. The alternating stripes on their abdomen help differentiate between species. Yellowjackets all have yellow or white on their faces. This predatory wasp feeds on insect pests but will also consume nectar and juices from fruit.

How A Colony Gets Started:

The yellowjacket colony begins with an overwintering queen that was fertilized by a male reproductive the previous fall. Males are called drones. They are born and live only to reproduce. After reproducing, the female will locate a place to overwinter. This is in a sheltered location such as a tree or soil cavity. In spring they emerge to find an ideal location to colonize. The young queen will begin the construction of the hive on her own. She will construct 30- 50 brood cells in which to lay her eggs. The young queen will feed her larvae chewed up fruit and insects for around 20 days before they pupate.

Workers will eventually emerge from their pupal stage to take over the responsibilities of the queen. This happens around midsummer. The smaller infertile female workers will emerge to gather food and nesting material, construct the hive, and care for the larvae (brood). The workers will also feed the queen, who’s only responsibility becomes reproduction. From this point on the queen will remain within the nest.

Colony At Its Peak

As the season progresses into late summer, the colony will mature with a population of around 5000 workers and up to 15000 brood cells. Reproductive cells are then constructed and male and female reproductives are created. Reproducing males and next year queens remain in the hive. They are fed by workers as the female builds up fat reserves to survive through winter. As the season dwindles, the drones and young queens leave the colony to breed. the male quickly dies upon breeding. The newly fertilized queen then seeks shelter to overwinter. Workers depart from the hive and die as the weather turns cold. The queen follows suit. Yellowjackets will rarely reuse the same hive. In fact the hive will quickly decompose as winter approaches. Each spring new queens will build a colony from scratch. Hives are constructed from cellulose material that is chewed into a wood pulp.

Yellowjackets can be a tricky pest for homeowners to control. They naturally nest inside of tree cavities, large piles of mulch, and empty rodent nests. Stinging insect control products specifically labeled for stinging insects often do not provide the residual control necessary to effectively treat these hard to reach nests.

To control yellowjackets, most people use an aerosol can of pyrethroid insecticide. These cans are great for treating hives directly. Its quick knockdown effect is what makes it such a popular insecticide for stinging insects. A yellowjacket nest is almost always deeper in the cavity than this kind of spray will fully reach. Also, the spray from these cans of wasp and hornet killer are quickly absorbed by building materials, rendering them relatively ineffective. In response to this, people often resort to sealing the yellowjackets’ entry hole. Yellowjacket nests can reach a population of 3000-5000 workers pretty quickly. If you plug the way in and out of their nest, they will find a way out. That way out can be inside of your home! Eventually they will chew their way out of being trapped by caulk or foam. Sealing their entry hole is not a good idea!

Your best bet for control is to call a professional. That way, the correct tools and registered pesticides can be used (and you won’t get stung). Dusts are usually the best form of pesticides to use. The best time to treat a nest is right before dawn. Unlike honeybees, yellowjackets can sting repeatedly. Wear protective clothing if attacking this pest yourself. Since a yellowjacket colony can consist of around 2000 workers, nest removal might be necessary. Pupal forms of yellowjackets will not be effected by pesticides. a large enough colony will have plenty of insects in their pupal form. It is possible that adults emerging from the protected comb, will exit the hive and potentially sting people occupying the adjacent area.