There are 2 types of individual ants: Reproductives and Workers.

The males’ sole purpose is to reproduce. For the most part, they die a few days after mating. The queen mates once. Consequently she stores enough sperm to last a lifetime. This is pretty amazing considering that a carpenter ant queen can live many years. Most ant colonies are founded by a single fertilized female. After establishing the initial pieces of the nest, her sole responsibility is to expand the colony by producing eggs.

Ants develop through complete metamorphosis. Life stages include: egg, larvae, pupae, and adult. Worker ants are all female. Although most workers are the same size, some species have workers of different sizes (polymorphic). Carpenter ants are a good example of this. They have a caste of workers that perform specific tasks. Most workers remain in the nest. There they defend the colony, enlarge the nest, clean, and tend to both the queen and her young. Only a small percentage leave the nest to forage. These are usually older ants that are nearing the end of their life cycle.

There are 3 life stages of the colony: Founding Stage, Ergonomic Stage, and Reproductive Stage.

The first is the founding stage. This is where a single fertilized queen constructs a nest cell and then raises her first brood. In most species, the Queen seals herself in with the nest cell for protection. The Queen feeds the larvae with salivary secretions, her wings, and unfertilized (trophic) eggs.

It is important to note that some species have multiple queen colonies (polygyne). Others only have one queen (monogyne). If a colony was started by multiple queens but only require one, then the Queens battle until only one survives. This occurs when the minims emerge.

Not all colonies start this way though. Certain species start new colonies through budding and fission. Budding occurs when a number of workers leave with fertilized queens to locate a new nesting site. Fission occurs when a colony splits in 2 or more parts. This is similar to a plant. While most plants reproduce sexually, some can be propagated vegetatively through cuttings.

Ant colonies are fragile at first. They have limited resources of food and energy. It isn’t until around the 3rd generation that their chances of survival increase. At this time, they can overcome the trauma of losing a number of workers to predators or other factors.

The second stage of development is the ergonomic stage. This is when all of the colony’s resources go to producing more workers. This stage of colony expansion usually lasts at least 2 years.

The reproductive stage is when a colony matures enough to produce reproductives. These are more commonly known as flying ants or swarmers. Colonies can produce thousands of new queens. Yet only a few survive long enough to reproduce and establish a colony of their own. This is also much like plants. For as many acorns that fall from an oak tree, not many of them mature into trees themselves.

Swarms of flying ants leave the nest and mate at specific times. These are called nuptial flights. Mating is timed to coincide with favorable environmental conditions. The weather is generally not hot. That way they do not dry out during their escapades. Rainfall will have occurred within the past 24 hours. Since most ants are soil-dwelling, moist soil allows the newly fertilized queens to more easily excavate a nest.

Flying ants can create alarm in homeowners, since they are often mistaken for termite swarmers. There is a noticeable difference in the 2 insects. Ants have a constricted waist, different sized wings, and females have an elbowed antennae. Termites have a beaded, straight antennae. Their bodies are broad. And their wings are equal sized.

Additionally termite swarmers are very prone to desiccation. Since they are so soft bodied, it is unlikely you will find one dead in your window sill. They lose their wings quickly and their bodies shrivel up pretty quickly. Ants are hard bodied and their carcasses persist for a significantly longer period of time.

In Ohio, termites swarm only in spring. Different species of ants swarm at different times of year. If you see flying reproductives in summer/ early fall, they are not termites.

Most ants are omnivores with a diverse diet. Their food preferences change throughout the season. It just depends on what the needs of the colony are. To feed the developing larvae, high level of proteins are required at the beginning of spring- into summer. Dead and live arthropods (insects, spiders, etc) are fed on to supply this need. Once summer hits, the colony is in high gear with a bunch of workers. At this time, carbohydrates make up most of their diet.

Both solid and liquid forms of food, along with water, are consumed by ants. Liquids and water are ingested by the workers. Then the workers return to the nest. If you look closely you’ll notice their bloated abdomens. This helps when you are trying to follow them back to their nest.

Solid food is not directly eaten by workers. First the particles are carried back to the nest and fed to the larvae. The larvae then regurgitate the food and feed it back to the workers. The workers feed this food and liquids to everyone else (workers, larvae, queens, and males). Trophallaxis is the term for this complex exchange of food. An ants jaws are used for building, gnawing, biting, carrying- basically everything. Oddly enough they don’t use their jaws to eat though! 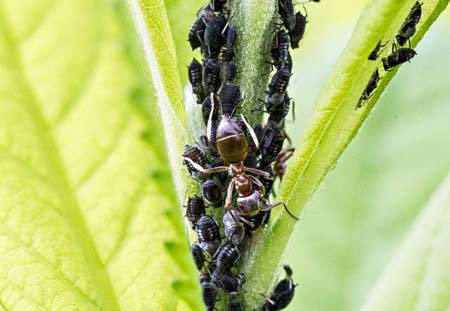 Aphids and similar plant-feeding insects (scale, mealybug) produce an important food source for ants called “honeydew”. Ants herd aphids for this substance, much like we herd cows for milk. Some ants will even overwinter aphids inside their nests. This shows you how important of a food source it is. Honeydew, nectar and juices from decaying fruit provides most of their carbohydrate needs.

Ants are a eusocial insects. There are approximately 1000 species of ants in North America. Only 50 or so infest structures. And finally only about 10 species are considered pests. A few invasive ant species are very detrimental to the ecosystem. They were introduced to our country without any natural predators. Fire ants have destroyed the ecological biodiversity in the Southeast States. Argentine ants displace our native ant species. The yellow-footed crazy ant is starting to do the same thing in Ohio. The greater Cleveland area primarily deals with carpenter ants, odorous house ants, and pavement ants as pests.